Schwarzwälder Kirschtorte, a classic chocolate, whipped cream and cherry cake, is staging a comeback in the Black Forest, a wedge of southwest Germany where the dessert was invented in a humble confectioner’s kitchen almost a century ago.

Stretching some 200km east of the Rhine, from Karlsruhe almost to the Swiss border, the Black Forest is something of a misnomer. It is definitely more green than black, unless seen on a snowy day when the landscape appears monochromatic, and it is more a series of thickly wooded hills, high pastures and valleys than one big forest. Scenic roads dip and rise through the region, past farmhouses huddling on hillsides and half-timbered towns with a rustic, fairy-tale-like prettiness. Nearly every cafe serves Kaffee und Kuchen (coffee and cake) at 3pm sharp.

Ask the locals where to find the best Schwarzwälder Kirschtorte (known as Black Forest gateau in England) and they will probably rattle off the names of a few traditional hilltop cafes, where you have to earn your Kuchen with a brisk three-hour hike through woods of fir and pine, or sing the praises of Oma (grandma) who makes her cake with cream fresh from the cow. Other locals have embraced the new — and highly controversial — Black Forest gateau that can be found in a tin, the brainchild of baker Johannes Ruf who runs the Holzoffenbaeckerei in St Peter. He made the cake small enough to fit in a picnic basket, just big enough to share.

No matter what the size, all are in agreement as to the gateau’s core ingredients — layers of moist sponge and sour cherries, lashings of whipped cream, a dash of Kirschwasser (cherry schnapps) and a dusting of chocolate shavings. Get it wrong and the cake is gooey and boozy. Get it right and the dessert is light and spongy, the sourness of the cherries perfectly offsetting the sweetness of the cream. For a taste of the real deal, try the following spots:

Famous as the home of Germany’s highest waterfall and the world’s biggest cuckoo clock, Triberg is a kitsch, quaint, storybook village. The Sheik of Dubai and the BBC’s Hairy Bikers have made the pilgrimage for the prized Black Forest gateau at Café Schäfer, baked by Claus Schäfer, the heir to Josef Keller’s original 1915 Schwarzwälder Kirschtorte recipe. “I only ever bake a couple of cakes at a time and use top quality Kirschwasser,” said Schäfer. “A little marzipan adds flavour to the shortcrust pastry base, too.”

The grande dame of Germany’s spa towns, Baden-Baden has been baden (bathing) ever since the Romans discovered the therapeutic benefits of its waters. Today it is a gentrified city of leafy avenues, belle-époque villas and delightfully old-world cafés — none better than Café König. Alongside petit fours, éclairs and fruit tarts that look (almost) too good to eat, sits the crowning glory, Black Forest gateau. Order a slice and do as royalty and celebrities have done before you – savour it on the chestnut tree-shaded terrace, watching the world go decadently by. 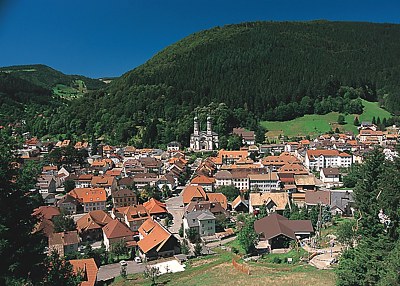 If you can never have your fill of cake, consider timing your Black Forest trip to catch the annual Black Forest Gateau Festival. Celebrating the Black Forest’s most famous export with baking contests and brass bands, the festival is held in Todtnauberg, a village with fine views of the region’s highest peak, Feldberg, on clear days. Even if you miss the fun, there is always the option of — whisper it very quietly — taking home a Black Forest gateau in a tin. They last for a year, you know.