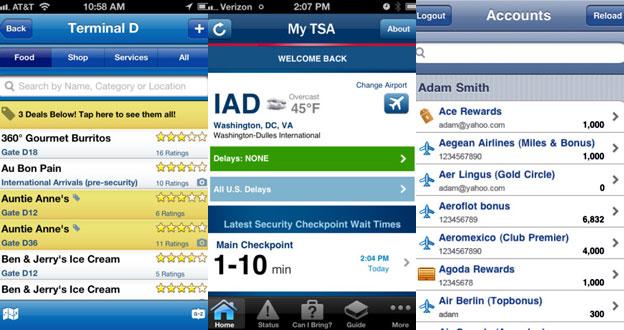 Flight+
Best for knowing your flight has been delayed or cancelled before the gate agent does.

When it launched in April, Flight+ ($3, iPhone and $5, iPad) was named Apple’s App of the Week because its intuitive interface makes it incredibly easy to track any commercial flight worldwide. The app plots an aeroplane’s location on a map, reducing the need to rely on a gate agent to confirm that a plane is en route. The app will also alert you when your flight is delayed or cancelled, sometimes faster than an airline representative will, and if you need to book a new flight, you can use the app to see upcoming departures at nearby airports. The main drawback is that the Flight+ app for iPhone doesn’t work on the iPad, and vice versa. (No Android version.)

Just Landed
Best for anyone in the US, UK, France or Canada who has to pick up guests at the airport.

Some of the best apps do only one task, but do it better than any other app. Just Landed (free, iPhone), which debuted in June, aims to help people who are waiting for guests to arrive on a domestic US flight. Enter the flight number, and the app will notify you five minutes before you need to leave your house, taking into account the flight’s status, an estimate of the average driving time between your whereabouts and the airport, and reports on traffic congestion. The app’s biggest drawback is that it only has good data on flights in the US, UK, France and Canada. (No iPad or Android versions.)

GateGuru
Best for people looking to make good use of their layover in an unfamiliar airport terminal.

GateGuru (free, iPhone/iPad; Android; Windows Phone coming soon) offers the most comprehensive database of airport businesses and services – such as restaurants, post boxes, and bureaux de change — spanning 191 airports, 100 of which are in the US. For each terminal, the app identifies which services are available before or after passing through security.

The iPhone/iPad version of the app also allows you to check-in for your flight and will alert you to any changes in gate, take-off time or arrival time. One drawback: detailed, gate-level maps aren’t yet available for many important airports, such as in Helsinki, Dubai and Incheon (South Korea).

AwardWallet
Best for having your frequent flier account balances within easy reach for spontaneous upgrades.

When checking in, an airline may give you the opportunity to upgrade your seat by cashing in some of your frequent flier miles. Knowing whether you should take advantage of such an offer requires familiarity with your latest points balances, so it helps to have AwardWallet (free, iPhone/iPad, Android), a rewards-management service that comes in both website and companion app versions. Punch in your membership information just once for your various loyalty programs (airlines, hotel chains, car rental companies and credit cards), and AwardWallet will continuously fetch your latest points balances and expiration dates. Travel companies increasingly run cross-promotions, so it can be handy to have mile and point totals for all of your programs on hand. One downside to using this tool: Southwest Airlines and American Airlines prevent AwardWallet (and other similar services) from automatically updating your frequent flier information. Neither airline allows the app to automatically pull in new mile and point balances. Southwest lets you plug in your info manually, while American won’t even allow that.

My TSA
Best for getting the scoop on security checkpoint wait times before you arrive at the airport.

In the US, the Transportation Safety Administration (TSA) bears the brunt of travellers’ frustration with the hassles of airport security. So the agency created the My TSA app (free; iPhone/iPad) to help fliers help themselves. The app’s “Can I Bring?” function catalogues 3,000 items and reveals whether each item is permitted in carry-on luggage. The Wait Times section offers a user-generated database of queue lengths at security checkpoints across the US. The app answers other questions, too, such as whether you can bring homemade pies through a security checkpoint (yes) and whether you can tote a spare lithium battery for your laptop in your carry-on bag (no). The app also includes weather reports and a national map detailing the major airports that are operating normally (coloured green) and which ones are plagued with delays (red). The TSA does not offer an Android version of the app.

The best weather apps for travellers