This article is written by Narayani Ganesh. Narayani is a senior editor with The Times of India. She writes on issues concerning the environment, science and technology, travel and tourism, heritage, philosophy, and health. 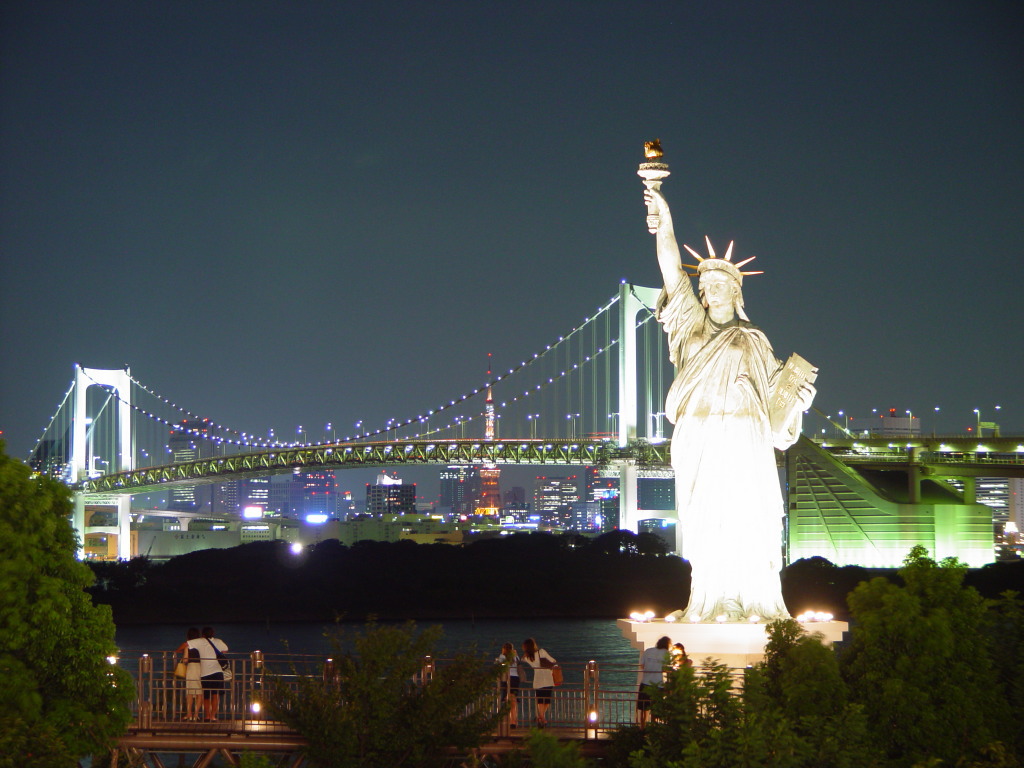 New York City is many things to many people. An important global financial centre and capital of fashion and fad, home to eclectic and traditional museums, shoppers’ paradise, popular setting for film and fiction, centre of research and study and a tourist favourite. Also easy target of terrorists, but endowed with spirit and gumption to bounce back. All these things rolled into one Big…. well, Apple. NYC is a temptation that’s hard to resist.

Due to the nature of the beast — as business centre and a melting pot or salad bowl of myriad ethnicities and persuasions — the city is also high on stress with New Yorkers under intense pressure to perform and survive with little or no support from family and friends as everyone is here from someplace else. Yet life goes on in the Big Apple thanks largely to the many distractions and pressure valves that operate throughout the city.

Nothing, however, can be more stress relieving than experiencing NYC’s two great natural heritage-rich outlets that have been called the heart and lung of the megapolis. One is Central Park and the other, the East River Esplanade. 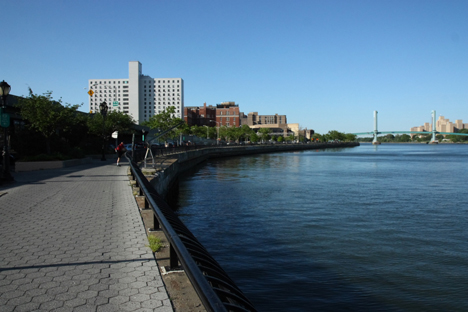 Walking up East 96th street, all the way to the river front, took me just 15 minutes from the apartment complex where I was staying, at the crossing of 97-98 Lexington Avenue. You can feel the river even before you get to it, as the cool breeze from over the waters caresses your face while you scowl at traffic crossings to reach here. The shimmering blue takes you by surprise, for one is not used to clean rivers in the heart of a city, burdened as they are wont to be with effluents and garbage — but not NYC’s East River. It welcomes joggers, lovers, senior citizens and dog walkers, pram-pushing parents and frisky children with equal exuberance, as the esplanade shaded by young trees gives room for everyone to find their space.

I settle down on a wooden bench and decide to just relax and observe, and if possible, empty my mind of thoughts that of late had begun clouding my perspective with alarming regularity.

It’s a Friday morning, the beginning of a weekend for some, and the esplanade is not without its share of visitors. I was here last evening as well, and witnessed a couple lift a rowboat out of the waters with the help of a pulley. They must be really passionate about boating, I thought, to take all this trouble to lower and then to lift a heavy object that would have to be put away until the next free day.

A man wearing cap, shorts and sneakers repeatedly casts his fishing rod into the waters, even though he comes up each time with nothing. Was he really expecting to catch fish here? Or was it an excuse to get away from the humdrum of routine, a form of meditation in the very act of casting and retracting the line that returned empty each time? Did the empty line carry a message, to empty your mind and be free? Perhaps. Whatever the ritual, it certainly was relaxing to an observer, so it must have a similar effect on the doer as well.

This morning, though, there’s no one fishing but I do see a couple of bare-chested men jogging their way along the river as cars whiz past on the other side of the walkway, and commuters go about their daily business. Beyond the road are a set of brick-coloured high-rise apartments that are at least 25 storeys high, all overlooking the river.

It’s a warm summer here in NYC and temperatures have been going up to more than 32 degrees Celsius, unusual for this time of the year, end of May. I’ve had my fill now of cyclists, joggers and walkers. 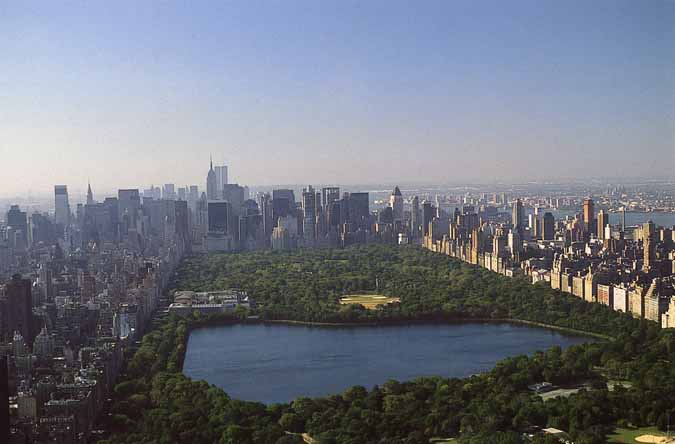 So I pack my laptop and start walking in the opposite direction — towards the other great sanctuary of the city, Central Park, straight down E 96 St towards downtown and right into the part that’s known as the ‘Museum Mile’ on Fifth Avenue — all along that road you have museums like the Guggenheim, the New York City Museum and the Latino Museum, to name a few. A little ahead a sparkling building rises to the skies; it’s the Mt Sinai hospital block that extends right up to face the park on one side.

Crossing the busy road, I find myself entering Central Park — the entire park has been created and landscaped from scratch more than 150 years ago — truly a haven right in the heart of NYC. As I take the incline up to reach the fenced off reservoir (again, an artificial lake much like the Pichola Lake in Udaipur that was intended as a water reservoir for the city), I can see NYC’s famous skyscrapers framing the park all the way across the reservoir and beyond. A feeling of calm washes over me as I stand there, leaning against the railing as joggers hurry past me, some with timers or iPods strapped to their arms, earphone wires dangling down to their pockets.

Doesn’t anyone just walk anymore? I mean walk as in walk, without having to time it or pace it or figure out how many calories have been burnt or whatever? Enjoy the sights and smells and sounds of all that is around you instead of shutting them out with earphones? Blank out and walk aimlessly, going where your feet take you? 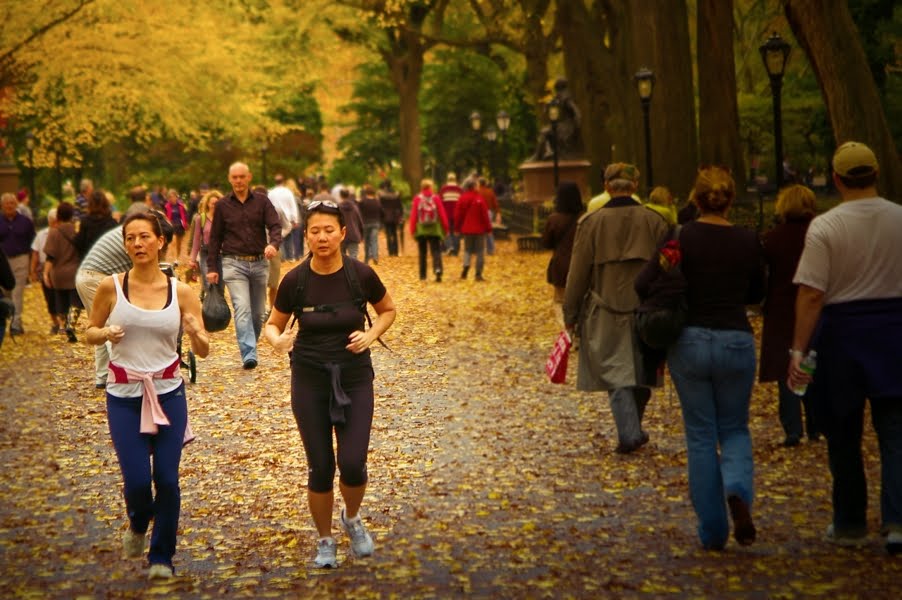 I scan the scores of walkers and joggers and voila! I observe two elderly ladies walking at a leisurely pace, chatting. One of them points to a bed of bright yellow flowers (primroses?), fenced in for protection and they stop to admire them. I click a few pictures of the pretty flowers. At a distance, a golden retriever basks in the sun, doing nothing — he watches idly through half-shut eyes, children playing soccer — relaxed and in no hurry to get anywhere.

The park does to you what you want it to do — you can submit to its charms and just let go of all that is worrying you. You could huff and puff across the beautiful park, shutting out all that it has to offer. Or you could be like that retriever and take in the sun; pause to admire the flowers like the ladies or just be.

Starting at the Central Park entrance nearest to the zoo — 64th Street — the first outcrop of rocks you encounter is the Hartland formation. Its dark grey colour and easily visible layering distinguish it from outcrops of the second schist formation in the park, the Manhattan. The rocks in the south of the park come from sediment that originally was deep in the ocean. — Sarah T Davidson, Geotimes

The Central Park gets 38 million visitors annually. It has 24,000 trees spread over 843 acres. It has 9,000 benches. There are seven ornamental fountains and approximately 150 drinking fountains. There are 21 playgrounds scattered throughout the park. More than 275 species of migratory birds have been sighted in the Park, a major stopping point on the Atlantic flyway.