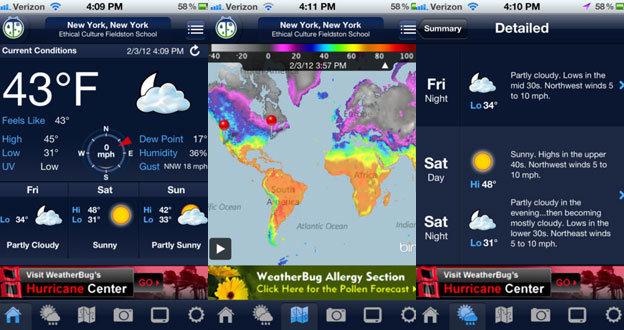 For detailed forecasts, iPhone users should give the WeatherBug app a try.

When it comes to weather apps, hype springs eternal.

Many promise to deliver weather reports relevant to a smartphone user’s precise location, but the advertised “refresh” doesn’t always mean a new forecast. Others claim to have easy-to-read interfaces, enabling users to make travel plans at a glance – but don’t. In reality, the most popular apps perform a few functions well — not all of them.

And the quality of weather apps seems to range greatly by region. For example, Canada’s local leader in weather data, The Weather Network, provides forecasted snow accumulations on its free iPhone and Android apps, something that neither the Weather Channel nor AccuWeather do for their United States apps. North American-centric apps also tend to lack access to the nitty-gritty data gathered by the official meteorology organisations in foreign countries. Australia’s Android Pocket Weather AU uses Bureau of Meteorology data, including (so-far-unique) access to the official agency’s detailed rain radar (about $2, Android, iPhone). Similarly, Britain’s new Metropolitan Weather Service app (free, Android, iPhone) delivers much more precise rain forecasts than its US-centric rivals. Bottom line: if precision matters, download the app from the official weather service at your destination, where available.

But if your holiday plans are still unclear, here are the apps most likely to appeal to a global traveller who decides itineraries on the fly. All of these apps offer optional alerts for major weather events, such as approaching rainstorms.

Android
Droids come with “widgets”, mini-apps on the home screen that constantly refresh themselves without needing to be activated. Travellers should swap out the pre-installed weather widget with the AccuWeather one, which comes free with its app. AccuWeather’s widget and app deliver temperature and condition forecasts for locations worldwide, updated hourly. AccuWeather taps into your device’s GPS locator tool and enables you to see a forecast for your precise spot on a map, without having to know your location’s name or spelling. That is a practical feature for travellers off the grid in a rural area or moving rapidly through the countryside on a train. The app also makes it easy to track forecasts for a few destinations at once and has far fewer flashing ads than other free apps, at least as of today.

iPhone
The latest generation iPhones come pre-installed with Siri, a voice-activated personal assistant that can be asked about the weather (such as “What is the forecast for the week ahead?”). But the result is generally vague, such as “sunny and 76 today, cloudy and 75 tomorrow”.

For detailed forecasts, iPhone users should give the WeatherBug app (free, iPhone) a try. It has far fewer flashing banner ads than rival apps and an easier to read interface on the iPhone, providing hourly predictions for the coming day and a 10-day forecast with minimal detail for rapid scrolling. A menu-and-swipe interface makes it easy to drill down for details.

One drawback is, unlike the Weather Channel and AccuWeather apps for iPhone, WeatherBug lacks the ability to find a forecast for any geo-location internationally, directing you instead to the forecast for the nearest urban centre or airport. But the app does allow you to track more than one destination at a time.

iPad
Apple picked the Weather Channel app as its first iPad-available weather app for good reason. No other app takes as full advantage of the tablet’s large, interactive, high-resolution screen. Radar maps are animated to let you suss out a storm’s direction. Touch any point on a spinning globe to see the weather at that spot. Plus, no company is as good at video reports of weather forecasts as the Weather Channel, and its videos appear beautifully on the iPad’s large screen. The app’s TruPoint technology, similar to AccuWeather, uses the iPad’s built-in GPS locator for assessments of weather conditions within a mile of any arbitrary location, without you needing to enter your location’s name. The app also makes it easy to track forecasts for a multiple destinations at the same time.

The best weather apps for travellers