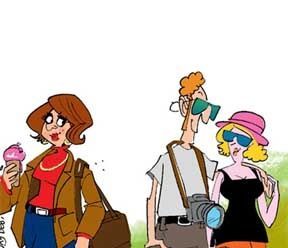 Be it attending a wedding or going on a holiday, Indians like to make it into memory of a lifetime, says the Kuoni India holiday report, 2011.

Indians, and especially women, like to dress their part and look their best even while relaxing abroad, reveals the survey that was released on Wednesday.

According to the report, women rule the roost, or one must say a family holiday, abroad. “Nearly 65% of the women travellers who take luxury or premium-end holiday at least once a year said that they buy new clothes before going on a holiday,” said Zubin Karkaria, CEO and MD, Kuoni India and South Asia. And to fit into these clothes, women exercise (34%), diet (29%) change their hairstyle (33%) and opt for beauty treatments.

The report also states how Indians dress to kill even on a holiday in contrast to their western counterparts who go casual. “Indian women dress more fashionably during the day (26%) and elegantly (20%) during the night. Not to lag behind, even men admit to dressing up more provocatively (26%) at night,” Karkaria says. “This is because Indians believe that they are presenting themselves as an Indian family to the world and like to be well dressed,” he adds.

But all the gymming and diet is likely to go down the drain, as 23% of them and three out of 10 women surveyed eat fast food. The survey also shows that 16% of people drink more alcohol on holiday than at home; women like to try exotic drinks (31%) and order expensive drinks (14%). “However, drinking on holiday is more popular among those without children (34%) than those who are with parents (22%),” it states.

Indians also believe that they flirt a lot when abroad (37%) followed by the French (34%) and 32% of them hope to find love on their trip. Moreover, while a foreign tourist will not mind kissing his/her beloved in the bylanes of Colaba, Indians’ amorous nature comes out of hiding especially near beaches (24%), in the pool (15%) and on a boat (14%).

Surprisingly, Indians dislike abroad what they are themselves accused of doing in India. “For instance, 35% of the Indian respondents said that taking pictures of others without asking, talking loudly (34%), littering (33%), spending indulgently (32%) and dressing to impress (31%) are their pet peeves on a foreign holiday,” says the report.