Coastal Wales has been named the “best region on Earth” to visit next year by a travel guide. 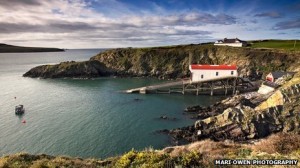 The Wales Coast Path, which passes St Justinians in Pembrokeshire, will open in full in May 2012

The nation’s coastline is highlighted in the Lonely Planet’s Best in Travel 2012 guide to the best places to go over the next 12 months.

Next May, Wales will become the first country in the world to offer tourists a formal trail right around its coast.

The Welsh Government said the recogition of the coastal path was “fantastic news”.

The book, in it seventh year, highlights 10 countries, 10 regions and 10 cities handpicked by the publisher’s travel experts as the best places to visit.

“How better to truly appreciate the shape – and soul – of a nation?” the annual guide asks of the coastal path.

It states: “What a wonderful thing: to walk the entire length of a country’s coastline, to trace its every nook, cranny, cliff-face, indent and estuary.

“Well, in 2012 Wales will become the only country in the world where you can do just that.

“The All Wales Coast Path (AWCP) will squiggle continuously from Chepstow in the south to near Queensferry in the north – via dramatic serrations, sandy bays and domineering castles – making 1, 377km of shore accessible.”

Lonely Planet’s Tom Hall explained: “These are some of Lonely Planet’s must-see spots for 2012, either because they have something special going on next year, there’s a lot of buzz about the place, or because we are tipping it as an up-and-coming spot that you should visit, before the crowds get there.”

He continued: “As well as the novel ability to walk its entire coastline, the region comes out top because of its wildlife, great surf, castles and fantastic spots such as Barafundle Bay and St Davids.

“Now that Wills and Kate have set up home in the area it has also received the Royal stamp of approval.”

Wales Coast Path project manager, Sue Rice, of the Countryside Council for Wales (CCW) said she was “really excited” at the news.

“We hope that the path will encourage not only visitors to Wales, but also locals to enjoy the health benefits of outdoor recreation, ” she said.

“The local authorities along the path have all put in so much effort to make this happen. Their dedication and hard work on the ground has enabled the project to take shape. We look forward to seeing it open next spring.”

“When it opens the path will provide a real boost to local economies around Wales’ coastline, ” he said.

The Path has been developed by the Welsh government and CCW, along with 16 local authorities and two national parks.

In addition to £2m a year funding from the Welsh government and the coastal local authorities, the project has received nearly £4m in four years of European funding.

CCW said improvements to the quality and alignment of the route will continue during 2012 and 2013 to ensure that the path follows the Welsh coastline as close as it is safe and practical.

Over time, the Wales Coast Path is expected to lead to the creation of circular coastal routes as links to inland towns and villages are improved, it said.