The raging sea beats the island of Batanes as if to say I am King.
The waves violently slap the rocks with enviable freedom. Its stammering power heeds no remorse.

The island however doesn’t back down, doesn’t fold-up or disintegrates. It takes a proud beating with a ‘Hah’, I am Batanes.

Batanes should indeed be proud of its coffers. It offers an amazing landscape that is as complex as a Roger Dean art work. The twisting spiraling mountains roll for miles and miles carpeted with green pastures. 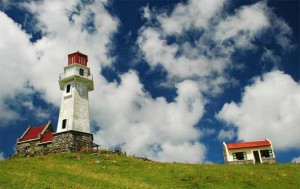 Atop its numerous cliffs one can get a front seat view of the feisty merging waters of the China Sea with the Pacific Ocean. There is also something incredibly charming about the island’s unique stone houses. Around 3 meters thick, these rock abodes crafted by the ancestors have stood against torturous rain and bullying winds. The roofs are made of cogon providing water proof shade. From afar the houses create an amazing texture of color and form that is bucolic and unlike anything that I’ve ever been in the provinces I’ve visited.

In spite the amazing scenery the island’s greatest strength is its people–the Ivatans. Storm warriors by birth they still posses a gentle demeanor, friendly disposition and an unbelievable sense of trustworthiness.

Crime is said to be non-existent in Batanes and people find no need to lock their doors. There is even a sign posted in the city treasury that reads “LOST AND FOUND- MONEY. Please claim inside”.

As most travel junkies know Batanes is the northernmost province of the Philippines and its smallest island both in terms of land area and population. Among its ten petite islands only three are inhabited– Batan, Itbayat and Sabtang. Sandwiched by Babuyan Island and Taiwan, the province is closer to Taipei than Manila. In fact an urban legend states that on a clear day one can see Taiwan and hear Chinese roosters crow.

Growth in Batanes’ tourism has been spurred by airlines such as Asian Spirit that conveniently jets weeklyflights (for a P10,000 round cheap tickets price).

Surprisingly posh, the main airport is located in Basco, the province’s capital (found in Batan island). Albeit the flight being a bit choppy, I land safely in Batanes and seek my adventure holidays.