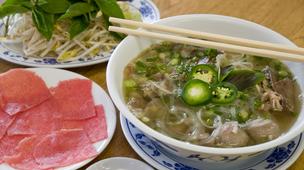 Since the 1970s, the vibrant community of New Orleans East has been home to what some say is the densest concentration of Vietnamese people outside Vietnam.

Located in the city’s Ninth Ward, the Vietnamese enclave is hidden in the city’s outlying neighbourhoods, about a 15-minute drive from the French Quarter and other, more tourist-friendly areas. Because of that, residents and visitors seeking authentic pho or lemongrass grilled chicken have generally had to hop in a car to get their fix.

But in recent years, Vietnamese cuisine started moving into the city proper, as New Orleans residents grow increasingly health-conscious and restaurateurs trade in cream-soaked, deep-fried cuisine for spring rolls and broth-based soups. The Vietnamese MagasinCafe even opened on trendy Magazine Street in mid-February.

The Vietnamese Kitchen at the Lost Love Lounge 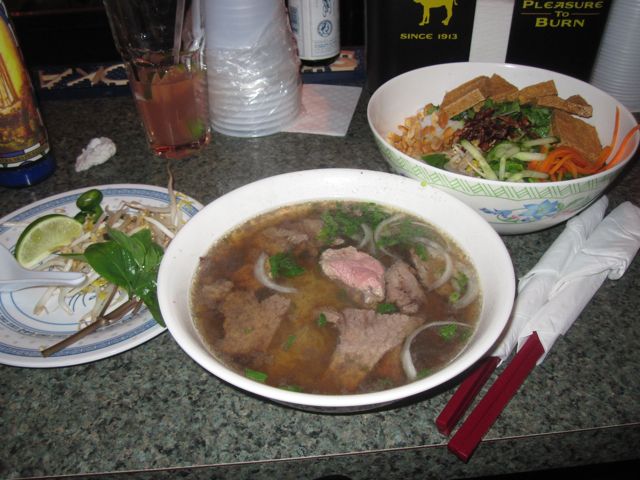 The LostLoveLounge, a bar in the city’s bohemian Marigny neighbourhood, features occasional stand-up comedy nights and spelling bees – and has a permanent Vietnamese restaurant in the back. Owner Bill Walker, who opened the lounge in 2010, said the informally named restaraunt (formally known as Pho King) was born from a desire to do something different in a neighbourhood saturated by traditional New Orleans food, and to attract the influx of younger, more progressive residents – some of whom are vegan and vegetarian. Instead of traditional bar fare like wings and french fries, the kitchen makes fresh stock for vegan, chicken and beef pho every day, and offers a variety of other traditional Vietnamese stews, banh mi, spring rolls and noodle salads, many of which are vegan-friendly.

When Kim Le opened Le Viet Café (2135 St Charles Avenue; 504-304-1339) in December 2011, she specifically chose to do so in the city’s uptown area, which suffered from a death of Vietnamese restaurants. “We have a lot of Chinese, Japanese, American and French food [here], but not Vietnamese,” Le said.  Le comes from generations of experience – her family has owned restaurants in the area since 1979 – but most served heavily-fried seafood. This is the first time she has experimented with her native Vietnamese cuisine, which emphasizes grilled meats and tofu.

So far, it seems to be catching on: “A lot of people come in for the first time and don’t know what it’s about, but they’ll try because it’s different, it’s exotic, it’s very healthy,” she said. “And they really like it. We have regulars already.” Located across the Mississippi River, in Gretna, Louisiana, Tan Dinh (1705 Lafayette Street; 504-361-8008) has always drawn a primarily Vietnamese crowd. When the restaurant opened in 2006, more than two-thirds of its clientele was Asian, according to manager Phat Vu. These days, a more diverse crowd sits down to dinner — only about half of Tan Dinh’s customers are Asian — and more New Orleans natives and tourists are pouring in, attracted by how waistline-friendly Vietnamese cuisine can be, as well as by the opportunity to try an unfamiliar menu that is still fairly heavy on local seafood. “Our soup is light and healthy,” Vu said. “It doesn’t have cream like lots of people are used to. People are more conscious of their health nowadays, and that’s helped a lot.”