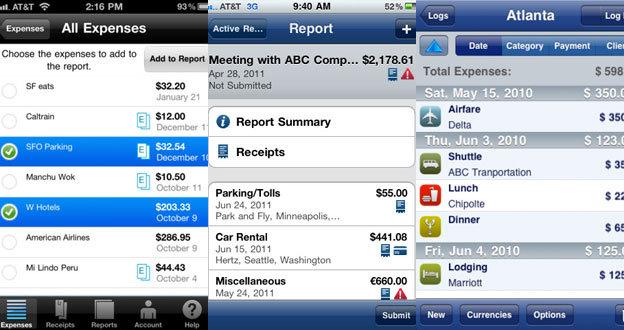 From left, Expensify, Concur and XpenseTracker.

The three apps most often recommended for tracking expenses are Concur, Expensify and XpenseTracker. These apps allow you to automatically import bank account and credit card transactions into an easy-to-use expense report that meets IRS requirements. They make it a cinch to snap photos of your receipts, categorise them (such as by “entertainment” or “lodging”) and attach the images to a report, which can be edited later via the apps’ websites. The apps also produce files that are compatible with many small businesses’ accounting systems, such as QuickBooks. Lastly, the apps allow you to enter transactions in a variety of currencies and produce reports in a variety of formats, such as spreadsheets that you can import into software like Excel.

Each of the apps differ slightly from the others, so though they’re all highly rated and frequently downloaded, one may work best for you.

Concur is the largest North American company in the travel-and-expense management business, and its tracking products are used by more than 15, 000 corporations. This app may be best for anyone employed by a large company because its data has the greatest likelihood of being seamlessly compatible with their company’s expense-reporting system. Free for the basic version on Android, iPhone/iPad and Blackberry.

Expensify is an innovative, two-year-old app that has been downloaded more than 300, 000 times and has high ratings from its users, many of whom seem to be freelancers and entrepreneurs. It’s my personal favourite for its irreverent touches; for instance, its “submit report” button is named “telepathy activate!” Silliness aside, the app does an accurate, automatic job of reading the receipts you’ve uploaded, pairing expenditures with individual items listed in your online bank and credit card statements, and categorising your expenses. Free for the basic version on Android, iPhone/iPad and Blackberry.

XpenseTracker has an elegant design and clean user interface, making it extremely intuitive and quick to record mileage travelled and other details on the fly. Many experienced travellers sing its praises, including Pauline Frommer, the globetrotting creator of the award-winning guidebook series, who says she uses it “religiously”. The app stands out for producing sophisticated, PDF-formatted expense reports that are well-enough designed to make you look like a pro when you submit them to clients. (The reports of the other two apps mentioned above are less impressive when printed out and seem mainly useful for copying the information and re-entering it into an employer’s or client’s own forms.) One downside: XpenseTracker currently only works with Apple devices ($5 for iPhone/iPad).