After Hong Kong returned to China in the late 90s, Singapore pretty much became the top choice for the white man’s outpost in Asia. Modern and efficiently run, this city of steel and glass considerably eases the transition from the West to the East. At some level, expat businessmen and their lives here are probably not very different from British governors from another age – but that’s another story. To me, this tiny city is like a sampler platter of delicious morsels that you can savor over a single meal. You can take that literally too! Singapore’s culinary scene is quite mind-blowing: from swanky restaurants run by global celebrity chefs, humble hawker centers, and everything in-between. 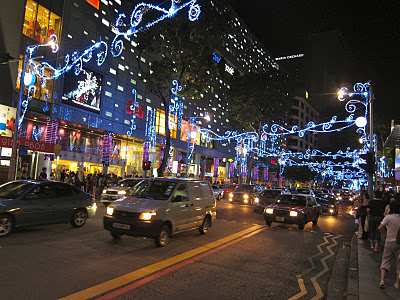 Between business meetings, my colleagues took me to a Cantonese Chinese restaurant called Taste Paradise for lunch. I wasn’t too worried that it was situated in one of the shopping malls – I have tasted some interesting foods in Singapore malls before. Two girls in traditional regalia greeted guests at the entrance while bright orange slats curved like a dragon’s back above the dining room and lit up the hand-painted portraits of emperors on the walls. 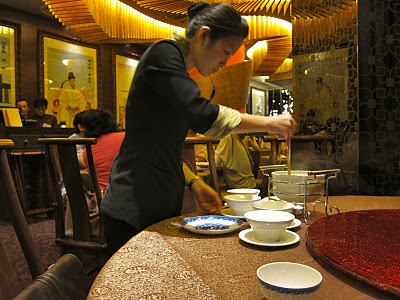 Taste Paradise was started by a local restauranteur who began with a small coffee shop but now owns a string of successful eateries in this city. I decided to let my host order for all of us, and what a good thing that turned out to be!

We began with a soup of chicken. The waitress brought out the large pot to the table and ladled out clear soup into our bowls. She fished out pieces of chicken and neatly put them on a plate, but apparently these were not meant to be eaten. Carmelized cashews and cups of steaming green tea followed.

Then came a series of dim sums: Ha Kau, Siew Mai, Xiao Long Bao, Char Siu Bao – the last one being among the best roast pork buns I have eaten. 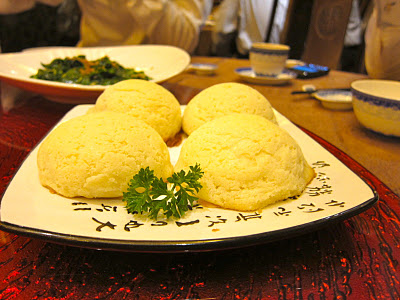 The steamed Cheong Fun with honey BBQ Pork filling was excellent too as were the Crackling Pork Belly. The XO Carrot Cake is a popular item on the menu and it was certainly interesting but not exceptional in my opinion.

For me, the stand-out items were the ones we ended with. The Custard Bun, Liu Sha Bao, with its molten bright yellow middle was fabulous as was the unusual dessert made of chilled avocado with a scoop of coffee ice-cream that was served in a dish with heavy white fumes coming off its base! 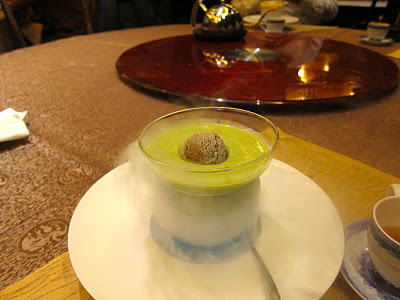 On Friday evening, after a long day a few of us headed to the watering holes in Orchard Road. First in Alley Bar, a dim-lit and high-ceiling L-shaped place popular with expat businessmen and hipsters alike. I was meeting with some old friends after a while and it was fun chilling out over glasses of Guinness and Truffle Fries.

We then walked down to Marche, a Movenpick owned restaurant themed like a bustling open marketplace in the basement of one of the swanky malls on Orchard Road. I settled for grilled sea-bass, German sausages and beer. 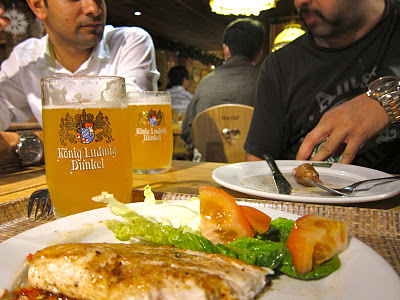 Finally, we walked down at Wine Connection to give in to our sweet cravings with a glass of Kracher wine and Tiramisu. I had a flight to catch so by midnight, when the night was still young, I headed back to my hotel. The Holidays were in the air with Christmas trees, lighting and sweet cakes and pastries on display everywhere. 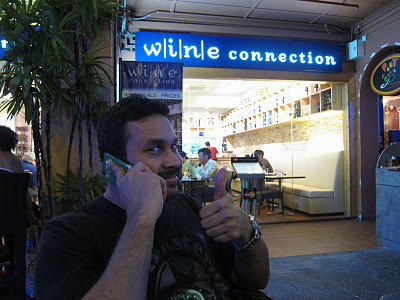