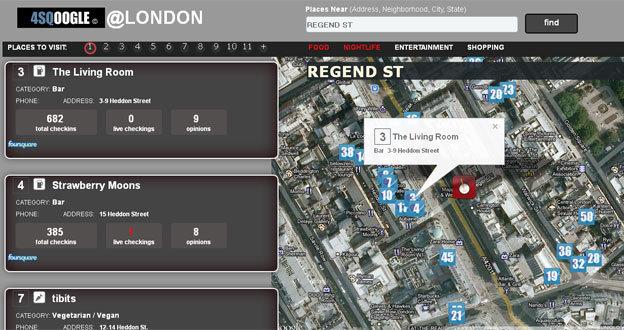 In the past year, a handful of free websites have debuted with features that up the ante on standard internet mapping tools like Google Maps and Mapquest.

Instead of providing turn-by-turn directions, these new sites (all of which are mashups of Google Maps) allow for navigation based on the type of transportation you’re taking, the time you’ve been given to explore, the sites you’re looking to discover or the memories you’ve made.

Find the most popular spots in a city

4SQoogle maps the most recent online check-ins from location-based mobile service Foursquare. The site doesn’t reveal the names of those who checked-in somewhere, but 4SQoogle proves its worth as a tool for discovering the city’s hottest venues, noting both “live” check-ins and total check-ins over time. During a recent lunch hour, London’s most popular spot among Foursquare users was surprisingly around the House of Commons. Later at night, West End venues were (not surprisingly) buzzing, with bar and restaurant the Living Room scoring the most Foursquare visits of any hangout.

Plot a path via public transport

Mapnificient.net reveals areas you can reach by public transport within a certain time. Say you’re staying at a hotel in Madrid and want to know where you could go for dinner within a 30-minute metro or bus ride. Drag the online marker to your hotel’s approximate location and set a slider to 30 minutes. A shadow map will then reveal the area you can easily cover by public transport within a half hour. The site works for most major US cities and for many other cities worldwide, such as Canberra and Madrid.

Discover a region based on time

Isochronous Application is to driving what Mapnificent is to public transport. Pick any urban area in the world, specify a maximum amount of time you’re willing to drive (or to ride in a taxi), and the site will predict how much ground you can cover during that time — assuming no traffic congestion or other hindrances. In a three-hour drive from London, for example, you could see a large swath from Nottingham to Dover.

(On the downside, there’s no guarantee you’ll actually be able to drive where the site says you can. If you enter three hours driving distance from Kinshasa, Congo, the site brings up a map that covers areas that may be inaccessible due to recent political unrest. As always, no one site provides all the information you need to plan a trip.)

Uencounter.me enables you to create a custom map of the world that you can annotate with personal notes of what you did at each place. Click on your virtual pins to reveal the notes detailing what happened at each spot, such as the time and location you visited it, what the activity was and who you were with at the time. You then have the option to share and overlay your “memory map” with those of friends and family members. You can email the map to others, too.

Plan a daily itinerary with guidebooks in mind

GuidebookPlus makes it easier to plan a daily itinerary with the help of major guidebooks, such as those published by Lonely Planet and Rough Guides. If you’re staying at a hotel in Benin and you want to see if there are any nearby attractions, GuidebookPlus can zoom in on a map of the area and display nearby virtual pushpins, each referring to a tourist attraction and with the relevant guidebook page number that describes the attraction. Then, you can use Internet searches or Google Books to possibly access the guidebook text for free.