The Xihoumen Bridge (simplified Chinese: ?????; traditional Chinese: ?????) is a suspension bridge built on the Zhoushan Archipelago, the largest offshore island group in China. The main span was completed in December 2007. The entire bridge, along with Jintang Bridge, was opened to traffic on a test basis on 25 December 2009. It is the second-longest suspension bridge ranked by the length of the centre span. The opening date was put off because of a ship collision on 16 November 2009 that slightly damaged the side of Jintang Bridge. 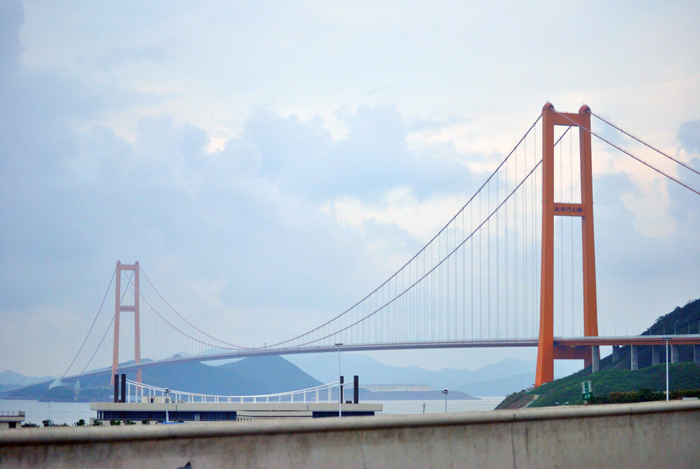 The 5.3-kilometre-long suspension bridge connection has a 2.6-kilometre-long main bridge with a central span of 1,650 metres. The approaches total 2.7 kilometres. When it opened, there was only one bridge with a larger span, the Akashi-Kaikyo Bridge in Japan. However, there are several other bridges planned or under construction that will also be larger. 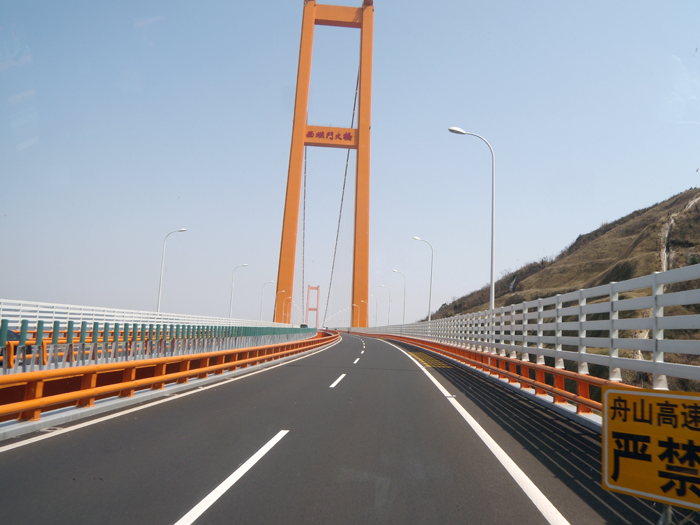 The Xihoumen Bridge links Jintang and Cezi islands. Another bridge, the 27-kilometer-long cable-stayed Jintang Bridge, links Jintang Island and Zhenhai of Ningbo. The two bridges are the second phase of a huge project started in 1999 to link the Zhoushan Archipelago to the mainland with five bridges. Construction of the other three bridges has been completed. 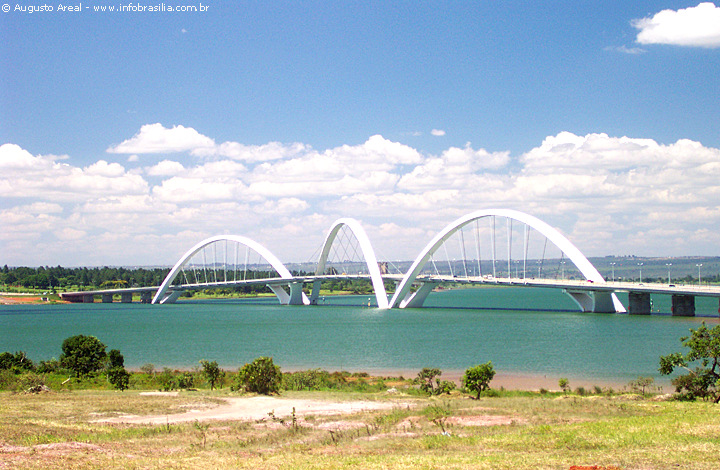 The Juscelino Kubitschek Bridge (Portuguese: Ponte Juscelino Kubitschek), also known as the President JK Bridge or just the JK Bridge, is a steel and concrete bridge that crosses Lake Paranoá in Brasília. It links the southern part of the lake, and St. Sebastian Paranoá the Pilot Plan (or the central and original part of the city), through the Monumental Axis. Inaugurated on December 15, 2002, the structure of the bridge has a total length of 1,200 metres (3,900 ft), a width of 24 metres (79 ft) and two carriageways with three lanes in each direction, two walkways on the sides for cyclists and pedestrians 1.5 metres (4.9 ft) wide, and three spans of 240 metres (790 ft).

It is named for Juscelino Kubitschek de Oliveira, former president of Brazil, who in the late 1950s decided to build Brasília as the new capital of the country. It was designed by architect Alexandre Chan and structural engineer Mário Vila Verde. 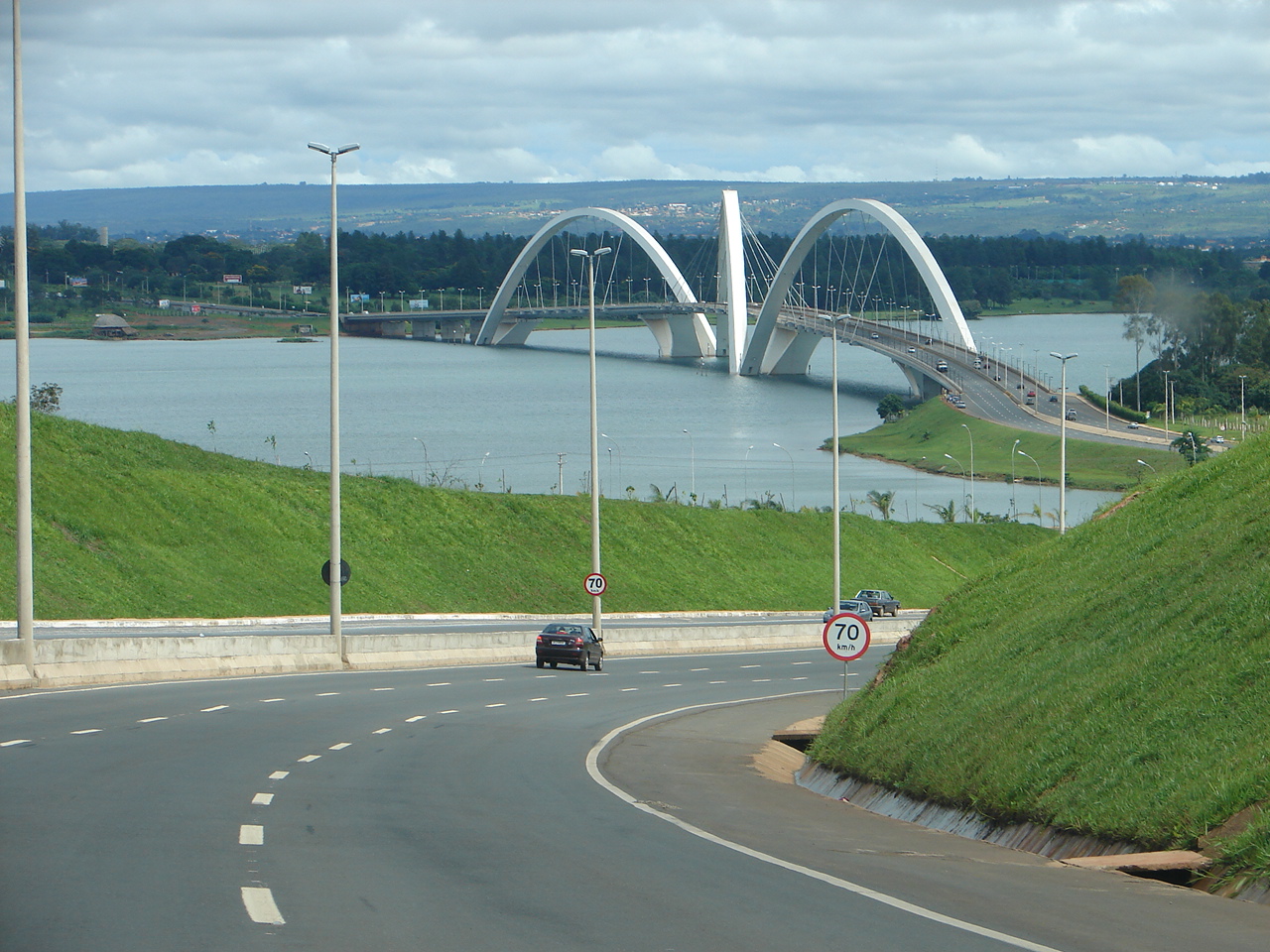 The main span structure has four supporting pillars submerged under Lake Paranoá, and the deck weight is supported by three 200-foot-tall (61 m) asymmetrical steel arches that crisscross diagonally. The decks are suspended by steel cables alternating at each side of the deck, interlacing in some kind of twisted plane (parabolic like). The entire structure has a total length of 1,200 metres (3,900 ft), and it was completed at a cost of US$56.8 million (R$160 million – Brazilian Reais, current 2003). The bridge has a pedestrian walkway and is accessible to bicyclists and skaters.

The main characteristics of the structure are:
Total length: 1,200 m
Deck Width: 24 m (three lanes in each direction)
Lateral sideways for pedestrians and bicycles: 1.5 m (on each side)
Rise: 60 m
Clearance: 18 m
Arch span: 240 m for each of 3 spans

Although Sears’ naming rights expired in 2003, the building continued to be called Sears Tower for several years. In March 2009 London-based insurance broker Willis Group Holdings, Ltd., agreed to lease a portion of the building and obtained the building’s naming rights.On July 16, 2009, the building was officially renamed Willis Tower.

Willis Tower is a 110-story trophy office tower containing a total enclosed area of approximately 4.56 million gross square feet (SF) and has a rentable area of 3.8 million SF. Willis Tower’s 4.56 million gross square feet would cover 105 acres if spread across one level. This is the equivalent of 16 city blocks in Chicago. Within the building, there are 25 miles of plumbing, 1,500 miles of electric wiring, 80 miles of elevator cable, and 145,000 light fixtures. The building weighs more than 222,500 tons, and it cost more than $175 million to build.

The Property’s rentable space consists of 107 office levels (including eleven levels containing mechanical spaces and broadcast equipment), one above grade retail level, one lobby grade retail level and three below grade levels that contain a mix of office, retail, storage space, service area and a garage. The property contains 160 parking spaces located in five levels in an executive parking garage.

The Property is situated on a square-shaped site bounded by South Wacker Drive to the west, Adams Street to the north, Franklin Street to the east, and Jackson Boulevard to the south. The site size is approximately 2.96 acres of land. The Property consists of three lower levels and a 110-story high-rise tower. The architect and structural engineer designed the Tower’s curtain wall with a modernistic masterwork of glass and aluminum. The curtain wall system consists of bronze-tinted vision glass and black anodized aluminum spandrel panels captured in a striking black anodized aluminum framing. Granite panels, with aluminum-framed glass storefront windows, accent the ground level façade on the east, north and south building elevations. Building setbacks are provided on the building’s northwest and southeast corners at the 50th floor, the northeast and southwest corners at the 66th floor, and the north, south and east elevations on the 90th floor. The structural framing consists of steel columns and beams in a “mega-module” system consisting of nine modules. The foundation system consists of belled, reinforced concrete caissons with reinforced caisson caps. The Franklin Street entrance has a beautiful large glass, aluminum and steel canopy which was added to the Property in the mid 1990’s. 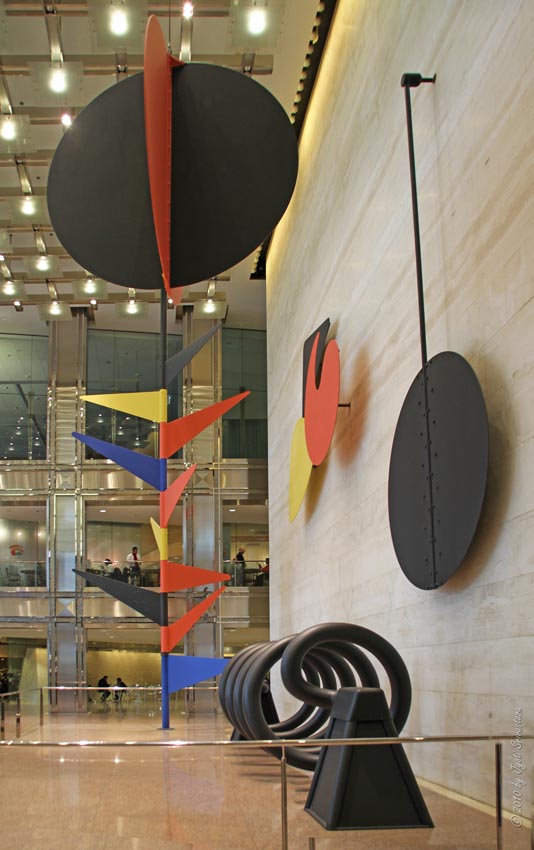 The Property’s impressive three-story lobby welcomes visitors and tenants with sculptor Alexander Calder’s Universe, a mobile of varied shapes, colors and movements suggesting the infinite potential of human creativity. Willis Tower lobbies are exquisitely modernistic, with transparent walls and escalators piercing the vertical space. The nearly $70 million lobby refurbishment in 1992 by DeStefano & Partners incorporated elaborate finishes and emphasized the sheer size of Willis Tower. The lobby is further characterized by polished granite flooring and travertine walls with stainless steel column covers. Soffit, column and ceiling mounted fluorescent, incandescent and high intensity lighting fixtures create a glowing well-lit environment. The main lobby of Willis Tower contains one entrance on the east side of the building and one entrance on the west side of the building. The Wacker Drive lobby serves as the primary entrance to the Property providing access from the street. The east entrance is accessed directly from Franklin Street.

On top of each antenna there is a TLD (Tuned Liquid Dampener). Its purpose is to counteract the sway of the antenna from the wind.

The airplane warning lamps blink 40 times per minute. The night intensity level drops to one quarter of the daytime level at dusk. 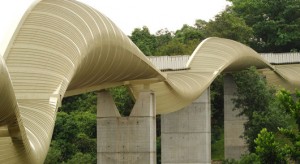